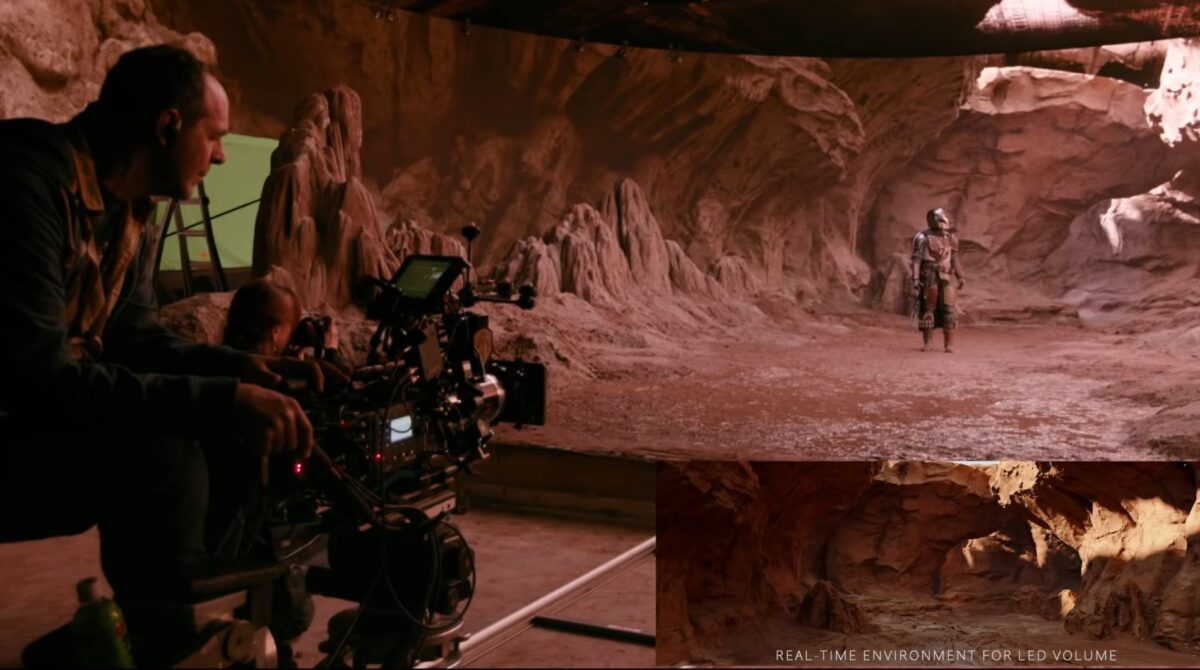 Today launches the second season of Disney+’s immensely popular (and meme-generating) The Mandalorian. Millions around the world celebrate the return of Baby Yoda and ruminate on the possible appearance of one Boba Fett.

It is well known that Star Wars films have a legacy of innovations in production. Arguably each Star Wars movie has brought forth another giant leap in filmmaking technology, regardless of the movie’s quality… hey, without Jar Jar Binks we probably wouldn’t have had Gollum!

Now that more productions are on television and streaming platforms, that innovation is now seen on TV series like The Mandalorian.

We stumbled across this fascinating and short YouTube video that covers the making of The Mandalorian, specifically how the show was shot mostly virtually using LED screen backgrounds. In fact, 50 percent of The Mandalorian Season 1 was filmed using this ground-breaking method, eliminating the need for location shoots entirely.

“Actors in The Mandalorian performed in an immersive and massive 20’ high by 270-degree semicircular LED video wall and ceiling with a 75’-diameter performance space, where the practical set pieces were combined with digital extensions on the screens. Digital 3D environments created by ILM played back interactively on the LED walls, edited in real-time during the shoot, which allowed for pixel-accurate tracking and perspective-correct 3D imagery rendered at high resolution via systems powered by NVIDIA GPUs.”

Not only does this method save time and money, but it should also help actors feel more connection to what they are doing versus acting in front of a green screen. Not to mention, capturing backgrounds (including accurate lighting with image-based lighting) in-camera rather than post is a game-changer, and will save lots of time compared to traditional compositing.

That said, it does require a change in workflow in that a lot of post-production work will need to be completed before shooting, as those assets will be used during the shoot.

At the ruef Design offices, we are always playing movies and ‘making-of’ special features. We love seeing the technology and innovation that goes into each shoot. We like to think the knowledge we absorb from these ‘making-of’ features helps make us better filmmakers, extending that knowledge of new filmmaking techniques and innovations to our client videos and animations.